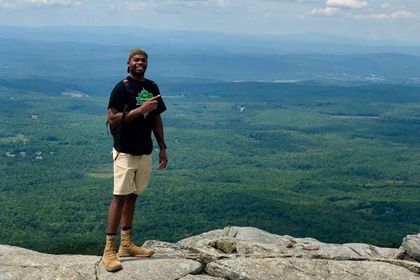 Ethan Lendore says he was “pretty averse” to politics during his early days at York College of Pennsylvania. However, after graduating with a BA in Public Relations last May, he applied for a position with Mayor Pete Buttigieg’s presidential campaign. Since August, Ethan has been traveling around New Hampshire working as an Organizer with “Pete for America.”

What drew him to the position is also what drew him to Public Relations: building relationships in communities. During his interview for the position, he talked more about what he did on campus–as Greek Life Ambassador, Interfraternity Council president, member of the Kappa Delta Phi fraternity, and Student Ambassador–and how that led to a desire to be a more integral part of his community.

“We talked about the ever-present desire to make sure that no matter what was going on in the community, I was stepping up and making sure that I was doing my part to ensure the community was working on it together,” Ethan says. “From public relations to here, I’m finding that’s the common theme.”

Ethan first started at York College as a Mechanical Engineering major. While he loved working on projects, he says he talked way too much and moved over to Marketing. He soon learned Public Relations, with its combination of communications and building relationships, was a better fit for his talents. “What I wanted to do was bring people together,” Ethan says.

He certainly didn’t expect to go into politics. Beginning with growing up in Brooklyn, New York, and through the move to Catonsville, MD and college, Ethan says he was more concerned about finding his way through life than who the president was.

Ethan’s views started to change when he moved to Maryland in eighth grade and subsequently attended York College. He began to understand how his impact on his community locally and nationally could affect the future, and he didn’t feel comfortable complaining about what was going on in his life knowing he had the power to try and change it.

“Now, politics isn’t something that’s just a distant concept; it’s something that I need to be paying attention to regularly,” Ethan says. “I have my life, and no matter what’s going on in my life, I have to be the one that’s advocating for the change I want to see.”

Today, Ethan works out of the Concord, New Hampshire, area. He lives with a family there while working on the campaign through a supporter housing program. Every day looks different, but his overall goal is to connect the community with Buttigieg’s campaign and each other.

Some days he might walk through the neighborhood and knock on doors, while another day he could be working in support of a Town Hall with his candidate. It’s flipped the traditional 9-to-5 narrative on its head for Ethan. Before, he was weighing his options between post-graduate work was a regular job with steady hours or Officer Candidate School for the Army. Now, he’s part of a historic campaign in a historic election.

“I needed to do something to speak up for the people who don’t have time to speak up the way I never did,” Ethan says. “Everything’s changed—it’s not just some random dude that’s running for office; it’s some person that’s going to directly impact my future.”

Ethan hopes that others realize the importance of voting and ensuring they speak up for what they want. He also hopes other college students will get involved on their campuses and learn how to communicate with people. In the meantime, Ethan will continue serving communities and supporting the nation one day at a time.