For Finance major saving money for a better future, ‘it all adds up’ 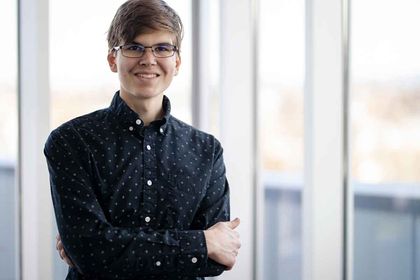 Greg Moser didn’t know anything about water heaters. He didn’t have a budding passion for plumbing or a sudden interest in home ownership. But, for a chance at a $1,000 scholarship just by writing an essay about them, he figured he’d learn a bit about the topic.

“I’ve always been kind of well off in my writing ability,” the sophomore Finance major at York College of Pennsylvania says. “Even though it doesn’t have anything to do with finance, I can still write a good essay about things I have no interest in or no relationship to.”

In the grand scheme of things, $1,000 might not seem like much, but Greg thinks about money all the time. And he knows it all adds up in the long run. He beat more than 100 other students to win that particular scholarship, awarded by an engineering firm out of California.

It was one of many he applied for. He uses the website fastweb.com to search for all kinds of scholarships.

For example, he even designed a graphic for motorcycle safety—that one he’s still waiting to hear back about. Graphic design isn’t exactly in his wheelhouse, but it never hurts to try, he says. “I figured that if I don’t try then someone else is definitely going to win.”

Saving for the future

Greg is a commuter. He has a part-time job. He thinks York College is affordable, but still knows he’s going to graduate with student loan debt. “I just want to do as much as I can now so I have less debt when I graduate,” he says.

That means bringing lunch from home and not making impulse purchases. When he’s out with friends, they might see something for $10 and buy it without thinking. It’s just $10, after all. But not Greg. “Most of my money I save,” he says. “I keep track of my income and expenses.”

He does have the occasional indulgence. About once a week he’ll splurge for a can of Arizona Iced Tea from the bookstore. He’s partial to the Arnold Palmer—half lemonade, half iced tea. They’re about $1 a piece, but hey, you only live once.

Greg likes Finance because it combines managing and saving money. He’s an organizer and likes putting things in their proper places, so it’s been a good fit. “I’m definitely growing and learning as a person,” he says. “College has really opened my mind to so many other ideas outside of just the common core like you do in high school.”

Last year, he was a member of the College’s Student Managed Fund. Now, he’s started playing around on the investment app Robinhood, where you can trade stocks without commission fees.

He’s only in his second year at York College, so he still has a lot to learn. But, he’s excited for the future, to learn more about how to not just manage his own money, but how to help other people with theirs. Someday, he hopes to become a financial advisor or an analyst at a bank.

Until then, he’ll keep chipping away at his debt, saving a few bucks here, a few hundred there, and adding a $1,000 in scholarship on the way. He knows, after all, “it all adds up.”