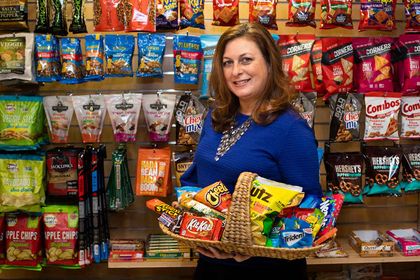 From chocolates to potato chips and everything in between, Renee Tacka considers herself a “snack food connoisseur.” With a BS and MBA in Marketing from York College of Pennsylvania, she is focused on consumer marketing and finds herself drawn to the way people shop—especially for snack foods.

“I like the concept of understanding how people engage in a store and how they go through a decision-making process,” says Tacka, Assistant Professor of Marketing at York College of Pennsylvania. “To me, marketing was never just about the endgame advertising message. It was more about understanding how and why people buy.”

Back in 2015, Tacka was two years into her doctoral studies when her sister handed her a copy of Shopper Marketing magazine. This new facet of marketing was only about 10 years old and was new to Tacka. She learned that “shopper,” as it is called in the industry, focuses on the complexity of understanding the shopper and the triggers or behaviors that drive conversion (purchase or acquisition) and loyalty. Shopper marketers focus on “whole-person engagement,” which means that strategies are built to engage with consumers at all three stages of buying—pre-purchase, shop, and post-purchase.

Tacka was hooked. She decided to focus her dissertation on the subject and became a member of the Path to Purchase Institute in Chicago. When she learned about a series of shopper marketing courses offered through the organization’s Leadership University, she enrolled. After completing the six classes, Tacka graduated in the first cohort of shopper marketing students, and it fed her growing interest to use the shopper marketing process as a central theme to her doctoral work.

The whole idea behind Tacka’s dissertation was to find something that academics hadn’t tackled yet. A lot of industry conversations were revolving around “instant consumables.” It’s a term widely used in the industry, but not in academia. It covers candy, gum, and a variety of single-serving snacks often purchased without much thought in the checkout line and eaten within 30 minutes of purchase.

As more shoppers buy on Amazon and other online retailers, buying a chocolate bar and getting it two days later doesn’t quite follow the traditional impulse buying model, Tacka says. Snack companies that usually enjoyed double-digit sales growth year-over-year were reporting annual growth of 2% or less. For this reason, Tacka felt there was an opportunity to explore new ways of selling and marketing snack foods while in-store.

The challenge was…what’s the story? Tacka’s dissertation research was growing, but needed a theory to connect it all. “I was the first person really to dig into the concept of instant consumables,” she says. I asked myself: “How can this research be helpful to the snack food marketers trying to attract customers to their products?”

Bringing it back to the person

Tacka was teaching her Advanced Advertising class at York College when she started reviewing attitude theory with her students. In psychology, attitudes are learned beliefs, feelings, or behaviors toward a concept or object and consist of three parts—cognitive, affective, and conative. By understanding more about attitude, a marketer can learn more about what drives consumer motivations. The lightbulb went off—Tacka realized that applying attitude classifications to her data would enable her to measure the differences in how people buy snack foods.

“I decided to forget about going through checkout lines and figuring out a way to attract those buyers,” she says. “I needed to fundamentally go back to the concept that people inherently make decisions on impulse differently. We can classify shoppers as cognitive and affective, meaning that they make purchases logically or based on emotion.”

Tacka discovered the study, “The Dimensional Structure of Consumer Buying Impulsivity: Measurement and Validation” by Dr. Seounmi Youn (2000). In her research, Dr. Youn created a consumer impulsivity scale that classified respondents as cognitive or affective based on their responses to a variety of impulse-buying and emotional purchase motives. Amanda Coley extended the research in 2002 when she applied the consumer impulsivity scale to gender and attitude for 15 different product categories, none of which was food related. This was Tacka’s opportunity to extend the research even further and into the category of instant consumables.

Ultimately, Tacka determined that her research would uncover if there was a relationship between attitude and Instant Consumable Snack Food (ICSF) purchases. After administering her research to a U.S. panel of consumers in September 2018, undeniably, the answer was yes. The findings in the study confirmed that consumer attitude was an important factor to participation in the ICSF product category. Affective shoppers participated higher in every product type, across every store channel, and with the most frequency. Affective shoppers appreciated all of the thought-provoking, emotional, and sensory activities that are applied to the sale and promotion of ICSF products, making them much more likely to respond to marketing communications either in-store or out-of-store. For cognitive shoppers, if it isn’t on their list, they aren’t buying it.

And while the data shows there is less impulse spending at vending machines, there are plenty more opportunities to engage buyers when they go into grocery stores, mini marts, pharmacies, or a variety of other store channels.

“It’s hard to change a shopper’s behavior, but if I understand why someone behaves the way they do, I can use that as a tool,” Tacka says. “If there are 100 people in the store and 20 are going to buy an instant consumable, how do I get that number to 50? If I understand the shopper, I can understand how to market to them.”