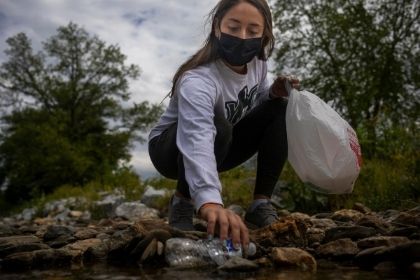 Microplastics are the teeny-tiny plastics that break off water bottles or shopping bags and later become ingested by the tiniest of animals that call waterways home.

Volunteers at a park cleanup gravitate to the plastic water bottles and shopping bags that clutter local waterways. But, even when those trash items are removed, their impact is felt by the tiniest of animals who call the lakes, streams, and creeks their home.

“We think of plastic pollution as the things we can see—the straw in a turtle’s nose or the plastic binding from a six-pack around a bird’s foot,” says Chloe Doyle ’21, a Biology major at York College of Pennsylvania. “But it’s the things we can’t see, the microplastics, that have just as big of an impact on our ecosystem.”

As part of an undergraduate research project, Doyle wanted to examine microplastics in local waterways. Her goal was to find whether urban or rural areas had more microplastics in the water and if the size of the creature that consumed the plastic impacted how much plastic was in its system.

“Environmental science has always interested me, and plastics are a topic we can learn so much about,” she says. “This was my chance to dive deeper into something that’s so important for our society.”

Doyle started her research by examining the litter in both urban and rural areas in York County. Most microplastics, she says, are about 5 mm in size, ranging from beads to plastic fibers to pieces broken off larger items.

“It goes to show that we don’t always see how far these microplastics travel in our waterways,” Doyle says. “Just because we don’t see the litter doesn’t mean it isn’t impacting nature.”

Doyle has always enjoyed being outdoors and often feels more content in nature. She also is vegan and hopes her choice in food helps make an impact in the carbon emissions that have harmful effects on the environment.

Being able to present her research not only helps her understand the impacts of human habits on the world, but it helps her share that knowledge with others.

“Presenting my findings means I can hopefully get people to think differently about their plastic use,” she says. “There are little things we can all do to leave the Earth a better place than we found it. I think the more we uncover about that, the closer we are to treating our environment better.”