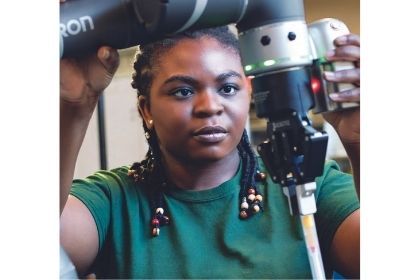 Mikaela Domingo ’23 is the first of several interns at York College of Pennsylvania who will gain industry experience thanks to a $60,000 research grant.

Mikaela Domingo ’23 remembers being in her first robotics class in 11th grade and loving everything about it. It fed her fascination for building and creating moving parts. It ultimately led her to leave her home in Long Island to study Civil Engineering at York College of Pennsylvania, where she’s one of several students who will embark on a new opportunity that will continue to fuel that passion for creating.

A student research project at York College of Pennsylvania was chosen to receive $60,819 in grant money as part of the Manufacturing PA Initiative, as announced by Gov. Tom Wolf. York College’s project—“Developing Modular Co-bot Automation Solutions for the Testing Environment”—pairs it with MRG Laboratories, a client company located in the College’s J.D. Brown Center incubator, and local manufacturer Airline Hydraulics Corporation

When Airline Hydraulics Corporation was presented the opportunity to work together on a state grant for robotic automation of a lab through York College and MRG labs, they eagerly jumped at the opportunity. Steve Heistand, Airline Hydraulics Corporation’s Automation Project Manager, says, “We pride ourselves on presenting innovative technology solutions to solve our customers’ challenging technical applications. Providing a cutting-edge collaborative robot (co-bot) to York College allows us to pass our years of expertise along to the next generation. The co-bot will allow the laboratory technicians to free themselves from performing some of the mundane and repetitive tasks found in a lab.”

That grant will provide several students at York College with an opportunity to find solutions in manufacturing that incorporate the help of co-bots, which are robots that streamline automation. The co-bots are typically programed to repeat simple tasks, providing a cost savings to labs and removing the risk of human error.

Already a member of the STEM Scholars program at York College, Domingo has seen numerous times how students from various majors can come together to create impactful initiatives. “It’s great to see students putting our different skill sets to use to reach like-minded goals,” she says. “That’s what our careers will look like someday, and it’s important we put that into practice now.”

From Chemistry to Mechanical Engineering and Computer Science majors, Professor Greg Foy sees a variety of opportunities for York College students to dive into this project. “This grant provides an opportunity for us to have a blended, team approach to understanding how co-bots can work alongside humans,” Foy says. “We’ve not been able to find anyone doing this kind of research related to analytics labs. It’s incredibly impactful work that students can learn from and say, ‘I contributed to this.’”

The co-bots that York College students will be working with each have a camera and a six-joint arm. The camera reads a bar code that gives a set of instructions, explaining the type of instrument the co-bot is placed in front of and the process it will perform.

The co-bot follows through with its programming and the training it was given, putting a lab sample into an instrument where data can then be read and uploaded to a server. That’s where the work begins, Foy says. Now, a technician, often a chemist or engineer, can look at the data and determine next steps for how to meet the needs of a client.

The co-bot can be trained to automate a variety of systems, with different instruments and different methods. MRG Labs, which performs grease and oil analysis, will run several tests on a single sample. Being able to develop automation systems for some of their testing could be incredibly beneficial, Foy says.

The field of Civil Engineering can be very broad, Domingo notes, but she has set her eyes on a career that focuses on reducing carbon emissions and elevates green manufacturing. She hopes to incorporate some of that into this project.

“I’m excited to have this experience and maybe build something from scratch,” she says. “It’s good for the College and the companies involved. More people will know about us and recognize the opportunities that York College provides. They didn’t go out and hire professionals to do this; they put students in the lab. I’m very grateful for that.”