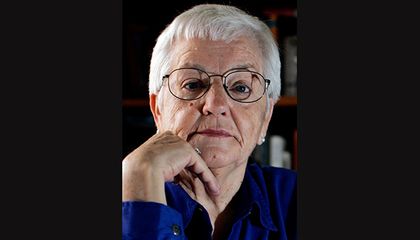 The Parliament Arts Organization is partnering with the Pennsylvania Human Relations Commission to welcome iconic diversity educator and racism expert Jane Elliott to York County, at 6 p.m. on Monday, September 14. York College of Pennsylvania’s Center for Community Engagement is pleased to co-sponsor this event.

The forerunner of diversity training, Elliot rose to prominence after a legendary 1992 appearance on the Oprah Winfrey Show that left audience members shocked by their own subconscious biases.

Elliot's appearance on the show, where she conducted the now-famous “Brown Eyes/Blue Eyes” exercise, has been viewed by millions of people across the country.

The exercise has since become the basis for much of what is now considered diversity and inclusion training.

Elliot has worked with corporations such as General Electric, Exxon, AT&T, and IBM, and has hosted lectures to the FBI, IRS, U. S. Navy, U.S. Department of Education, and the U.S. Postal Service.

The internationally recognized lecturer is a recipient of the National Mental Health Association Award for Excellence in Education for her work exposing prejudice and bigotry for what it is: an irrational class system based upon purely arbitrary factors.

The York presentation and conversation, during which Elliot will present a lecture from her home in Iowa and accept questions from virtual participants, will be held via Zoom and on The Parliament Arts Organization’s Facebook page.

York’s first and only African-American Mayor, C. Kim Bracey, currently the Executive Director of the Governor’s Center for Local Government Services, will serve as a moderator.

The presentation and various watch parties being held at locations around the county are an opportunity for catharsis and discussion about race relations in York County.

The Parliament is partnering with agencies to host the watch parties during the event. A full list of locations will be released prior to the event. Organizations and individuals interested in hosting a watch party should email info@parliamentyork.org to apply.

"Confronting people who are in denial and holding them accountable and engaging them in racial self-introspection is what Jane Elliott is an expert at and has been called to do.”

"We hope this conversation helps to create and inspire positive change for our community.”

Each year, York College hosts a series of cultural events that are designed to entertain and enlighten members of both the campus and regional communities.

Published three times a year, the goal of the magazine is to encourage engagement, action and participation in York College from our alumni and friends of the school.